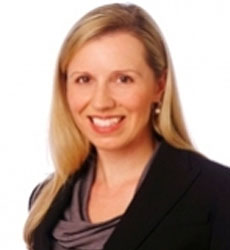 Nadine graduated from the University of Melbourne with degrees in both Arts and Law and was admitted as an Australian Legal Practitioner in 2009.  She was appointed as the AGC's Chief Executive in January 2016 after a number of years of work with the organisation.

Her prior roles in the gaming industry include operational and management positions at Crown Melbourne - including as Manager of Crown Melbourne's Responsible Gaming Support Centre.

As an experienced public speaker, workshop facilitator and qualified trainer Nadine has participated in a number of policy, regulatory and research forums as well as at national and international conferences on the subject of responsible gambling, industry activity in responsible gambling, gambling research, regulation and policy.

Nadine has been a member of Australia's National Association for Gambling Studies (NAGS) since 2005, and was Secretary of the Association from 2012 to 2015.

She is also a member of the International Association of Gaming Advisors (IAGA) and the European Association for the Study of Gambling (EASG).

Sylvia graduated from the Royal Melbourne Institute of Technology (RMIT) with a Bachelor of Social Science in Library and Information Services.

She joined the AGC in 2014 and has extensive industry experience within the gambling sector, having worked at Tabcorp in various capacities over nearly 20 years, using her research and information management knowledge and skills.

Sylvia assists with day-to-day activities at the AGC and helps to monitor and provide updates relating to responsible gambling and gambling statistics, research, policy and regulation.

Sylvia has been a member of Australia's National Association for Gambling Studies (NAGS) since 2014.

Jennifer joined the AGC in 2016 and has previously worked for both corporate and government sectors, undertaking research over a wide range of subject matter including science, engineering, mining, statistics, education and medicine for employers including the CSIRO, Rio Tinto and Victorian Department of Treasury & Finance/Premier & Cabinet.

Jennifer helps to monitor and provide updates relating to responsible gambling and gambling statistics, research, policy and regulation, and assists with day-to-day activities of the AGC.

She has been a member of Australia's National Association for Gambling Studies (NAGS) since 2016.